"The annual diet of an average global citizen in the first decade of the twenty-first century would include about 33 kilograms (or 73 lbs.) of potato. However, the local importance of potato is extremely variable and rapidly changing. The potato remains an essential crop in Europe (especially eastern and central Europe), where per capita production is still the highest in the world, but the most rapid expansion of potato over the past few decades has occurred in southern and eastern Asia." Wikipedia. This brief sentence explains very well the importance of potatoes nowadays. Due to this sentence and the request of many customers, Frucosol has decided to add one model of these machines to its range of products, the potato peeler PF-300. This machine is able to peel about 10 kgs of orange in no more than 2 minutes, so it is a very important machine for any restaurant, bar, hotel, catering, hospital, ...summing up, any place where the service of meals is continuous. As with the rest of our machines, we have made one video in which you could see how this machine works, as one image is always better than thousands of words.

Last month of February (24th to 27th) it took place the Hoteres Japan Exhibition in Tokyo.
There, Frucosol was also present thanks to its dealer, the company DAC CO LTD.
This company has bet for our glass polisher machine and they are making a very good job.
The website of the company is the following: www.dac-web.co.jp
We are sure this company is the perfect tool to introduce our glass polishers in that small but interesting country that is Japan. 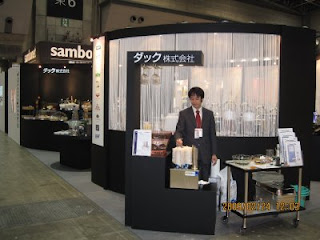 If you want to send us some doubt or suggestion about our machines or our company, do not hesitate to send us any comment. You can do it at the following e-mail:
export@frucosol.com

VIDEOS OF OUR PRODUCTS

WHAT DO YOU THINK?